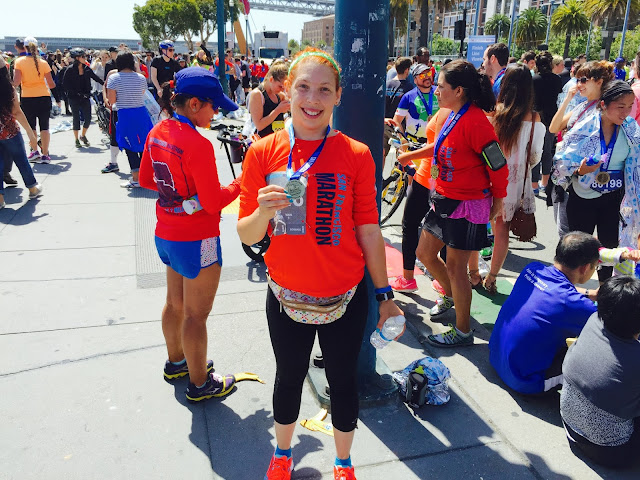 Today I ran my third half marathon, the second half of the SF Marathon. I ran it last year and only last week did I make the decision to run it again this year. It went quite well, and here are my thoughts:

Miles 1-5: I really don't recall this many miles taking place all within Golden Gate Park last year, but everything up to mile 6 was completely within the park -- who knows, maybe it was the same last year (I'm too lazy to look this up right now). The weather was cool and foggy, but after the first mile this didn't really matter. There was a lot of winding around and many hills. I felt some minor knee pain, which is unusual for me, and I'm wondering if my pains today have to do with skipping yoga for the last week. Maybe it really was keeping me going during the last few weeks. Anyway, there were also the delightful views of GG Park: bison, lakes, the trip around Stowe Lake in particular, the adorable boathouse, and merging with the full marathon runners (I always love that, because they're so inspiring, and on a much more amazing journey than I am). I tried to keep at my natural pace, which is 11:30/mile, and did so without much effort.

But back to hills, and this is where I had a major epiphany today, friends: hill training really works. This year I'd implemented hills into my regular training and long runs for the first time, and really pushed it by going up some of San Francisco's most brutal inclines. I had no idea if this was going to make any difference -- until today. While others were huffing and puffing and complaining and often walking up every hill, I easily, truly easily, ran up every single hill in this race. I had no problems, and that's something new for me. Given that my training runs took me up large hills so steep I'd have to stop at least once on the way up to catch my breath, none of these hills seemed challenging to me by comparison. I was SHOCKED by this. I honestly thought that all my running up and down hills these last few weeks wouldn't make a difference, but it made a huge difference. 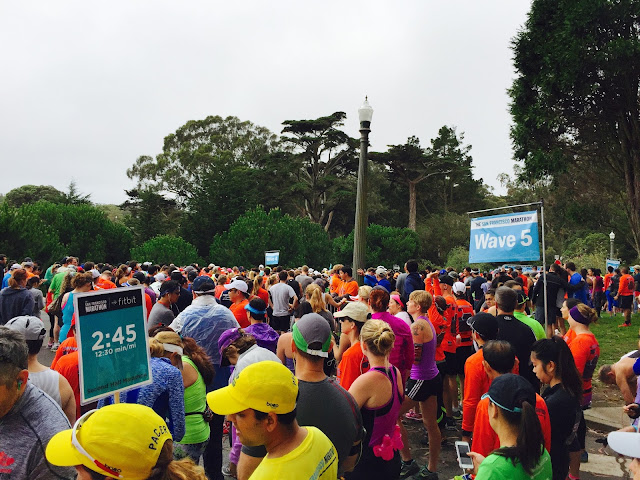 Mile 6: We emerged from Golden Gate Park at last, and re-entered civilization running up Haight Street. I was suffering from some more pain in my legs and some mental doubts, but was buoyed significantly when I saw Meghan at the water station located conveniently in front of her apartment on Haight and Masonic. She was screaming for me, and cheering me on, and seeing her was exactly what I needed to get my head back in the game! I didn't stop smiling for more than a mile after that encounter, and I felt so happy, even though my mind was screaming you're only halfway done!

Miles 7-9: I grew increasingly bothered by IT band pain during this time, which I hadn't experienced in months, and which was quite frustrating. However, instead of getting worked up about it, I tried to keep my pace, hit every water and electrolyte station as I had been, ate part of a banana, and took a small walk break per mile. It seemed that -- today, at least -- every time I walked for a minute, or walked at the aid stations, my IT band pain would subside to the point where I didn't notice it for a while. I also kept kicking my legs up so that my feet hit the back of my thighs, and that seemed to make it better for good spells, too. Still, I was frustrated and worried that I was going to be in bad shape by the time I got to the dreaded last 5k. I pressed on, trying to listen to my body, reminding myself that I was doing everything right. I still didn't really know how I was doing, time-wise, but I wasn't worried, since this wasn't a race where I wanted to push a personal record. 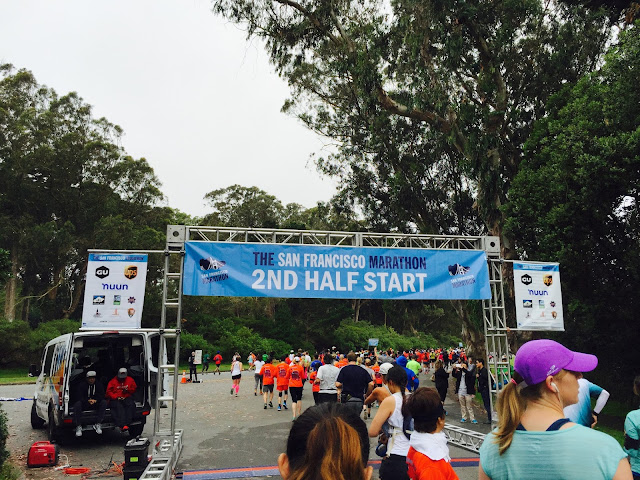 Mile 10: "Just a 5k left to go!" is something you hear a lot when you get to the 10 mile marker, and it's supposed to make you feel like an easy distance is the only thing separating you from the finish line. I think this is really well-intentioned, but also really funny, because the reality is that it's more like if you had to run a 5k with legs that feel like gnarled tree branches that have been set on fire.

At any rate, I slowed down a bit at this point, and began taking more short walk breaks to give my legs and feet -- now in a fair amount of pain -- a break. But the end was near, and I was really excited about that, and nothing was going to stop me from reaching that finish line in one piece. I realized at this point that I wouldn't break last year's time of 2:28, but since that nearly did me in last year, I wasn't too upset. My race experience had been almost perfect so far -- no regrets. So I soldiered on, only trying to maintain my pace and not lose ground to walk breaks.

Miles 11-13: I continued to slow and the pain became more difficult to handle, but many others around me seemed to be going through something similar, so I didn't stress too much. I knew I was going to finish, and that kept me going (I also knew G was waiting for me at the finish line!). Other than the pains of distance running, I felt great, and that was a glorious miracle to me. Somewhere along mile 11, a dead rat appeared in the middle of the road, and some people were seriously unable to handle this dead rat. I just ran by it and moved on. Lots of screaming around me, though. I guess if anything it was a break from thinking about how much my legs hurt!

Just after I passed the mile 12 marker, however, a minor incident occurred. We were running around the perimeter of AT&T Park, and a baseball game was apparently (poorly) scheduled for 1pm this afternoon. A huge number of baseball fans were almost entirely blocking the race route as we tried to run by, and by that I mean at its worst point, only one runner could get by them at a time. Here is what I have to say to that: do not fuck with someone who has just passed mile 12 in a half marathon, because I do not give a single fuck what you're doing, you need to have some respect and get out of the way of all these runners who have given so much and are nearing the finish line. So I got extremely upset, and I am not one to really be subtle when I'm upset, and I grumbled loudly, "Are you kidding me? SERIOUSLY? Get out of my way!" to which irate, entitled baseball fans began screaming at me as I ran by: "Oh yeah, SERIOUSLY???"  To which I thankfully did not engage -- but lets get real here, stay out of the way at the end of a marathon. Whoever was on staff at the marathon or the Giants organizations who let this happen: super uncool. Fix that next year.

The good thing about this rage-filled altercation is that suddenly I had a second wind! I wasn't hurting nearly as badly, and I had more energy for the rest of the race. So .... thanks, idiots!

Mile 13.1: There it was, the finish line! I crossed it and I finished the race and I felt ... good! Fantastic, actually. I ate a banana, waited for G to find me, then went and ate a huge lunch, still feeling good. And I still feel good now, actually, as I'm writing this. A miracle!  I also finished 10 minutes below my goal time, at 2 hours, 35 minutes. 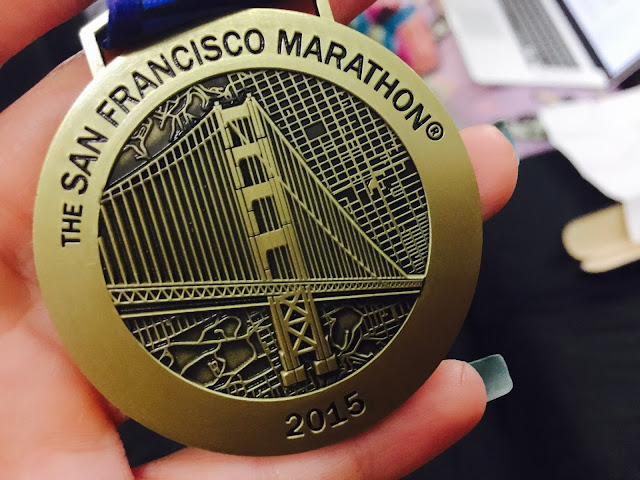 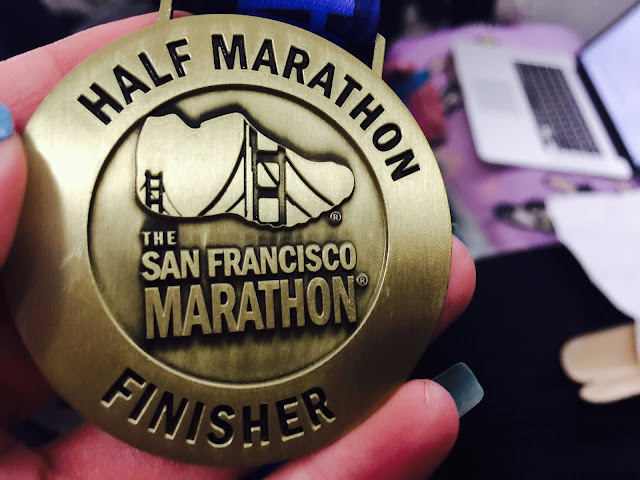