Today is another election day. Oh, how I loathe election days. It's really amazing how my adult life, and the mountains of political bullshit that have happened during my adult life, have changed me. I used to be so into politics, and now I hate politics with a fiery fervor. I also hate how stupid and generally lazy Americans tend to be when going (or NOT going) to the polls.

It's made me so angry today, seeing what my peers in SF are saying about the election. There is a very special kind of Crazy that exists in bay area politics, and it really grates on me sometimes. Just because I consider myself a moderate (particularly on fiscal issues), I'm branded an "Idiot Republican" by people close to me, as well as by strangers. Debating politics in San Francisco is a fool's errand. I stopped talking about politics online years ago, and I mostly stopped talking about politics in person, too, because the attacks? They are all personal. And it sucks. An open dialog about politics is not really welcomed in SF. The way things go can be summed up like this: "We're really tolerant, as long as you agree with us." News flash: that isn't tolerance.

My beliefs and my opinions are valid, but it's not worth it to me to push my personal "agenda" while living in the bay area. Nobody wants to hear it. And I hate arguing with people who are unwilling to engage alternative points of view. So I'll keep my fairly socially liberal, pretty fiscally conservative, always skeptical viewpoints to myself. And you're welcome to yours. In fact, I really want you to have your viewpoints. Your well reasoned viewpoints. Not what you read in the Bay Guardian's election endorsements, because then you're just toeing the line, being lazy. No respect there. I encourage everyone to form their own educated opinions on issues.

Good thing I have the freedom to vote my conscience. I love voting and I take it very seriously, even though I know most things won't go the way I wish they would. At least, by taking an informed position, and voting in every election, I know I've contributed. And that's what's most important.

On a related note: if you're someone who doesn't vote because you think you're making some kind of moral stand, that you refuse to vote on any of the propositions because they aren't written well and are meant to trick you -- I have news for you: you are part of the problem. If you don't vote NO on these propositions (and oh, I do), then you're going to be pretty unhappy when all the people who go in without doing their research and vote yes on everything that sounds vaguely appealing, pass all those poorly worded, manipulative laws on your behalf. Voting no is so important. It blows my mind that people think not voting on ballot measures, particularly in always high-stakes California, is the better option.

I know that so many other places (including many other states in the US!) have actual bipartisan systems and contentious elections and some are trying to prevent people of color from voting today, passing racist voter ID laws and trying to intimidate people at their polling places. These are real, frightening problems. I think this is what upsets me the most about bay area politics: ours aren't, or at least shouldn't be, actual problems. They're nothing like what's been going on in Virginia and Texas and I'm sure other places today. People here have such a sense of entitlement and self-importance, as if being intolerant and exclusive is our birthright. Just shut your mouth, do your research, go vote, and realize how damn lucky you are to be able to do so. Don't take it for granted. Don't focus on the wrong things. See beyond your personal worldview. We'll all be much better for it. 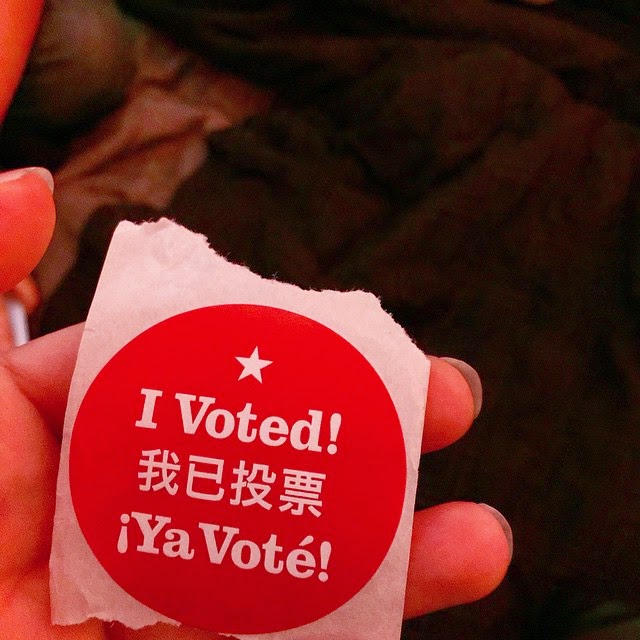