Whoa. The last 36 hours since my last post have been a little intense, and a lot surprising.

I was upset all day on Tuesday, particularly when I got home and saw that Amendment One had passed, and significantly so, in North Carolina. Then, on Wednesday morning, I got to work, signed online and the entire thing just started snowballing. First I saw an article on Fox News (about California seeking to ban gay-to-straight therapy for teenagers), and made the mistake of reading the comments. The ignorance was incredible; when I read comments from people saying the only right thing to do with gay people is kill them, or to allow them to commit suicide, I felt this horrible, horrible feeling in my heart and body. I felt like if this was what our country had regressed to...or never moved past...how could I stay here? I know I live in the most liberal bubble ever, but outside of it ... anyway, it was a tough thing to read.

I also read about how some of the bloggers I'd mentioned on Tuesday, who had been Pro Amendment One, had been harassed on the internet to the point of taking their blogs down temporarily out of fear for their families (and yes, that's how bad it got). I may be sad and disagree with these people vehemently, but I would never threaten them or their family; where do people get off doing that?! I mean really. The internet is a really nasty place sometimes, and on both sides of this issue, I do think people need to realize that real people are involved on the other side, or on the other side of a computer screen. Sheesh.

Then, just as I was sinking into the depths of despair about the world we inhabit, President Obama went on ABC News and endorsed gay marriage.

It didn't hit me until that very moment just how incredible this was, and how much I had been waiting for this moment, for nearly fifteen years. To hear every president either rail against homosexuality, or, like Clinton, preach for civil unions only, and then to have Obama pussyfoot around the issue for 4 years, it was not exactly unexpected ... but I really hoped for more. And today, I and all of those who had waited so long with me, heard that beautiful heartfelt explanation. It felt great.

I remember when I was 17, living in Los Angeles and very politically involved. I was working for a state senate campaign and followed all of the ballot measures intensely, even though I wasn't yet old enough to vote. This was March of 2000, and the Knight Initiative (Prop 22) was on the ballot.  This was my first encounter with gay rights being brought to the voters; it won, and it defined marriage as being between a man & a woman, though not constitutionally.

This is what I wrote in my online journal that night, March 7th, 2000:

"...the Knight Proposition is passing by a f****** landslide. 62% to 38%, with about 74% of precincts reporting. I'm so disappointed -- Christina emailed me earlier with a beautiful email that I appreciate very much. It just upsets me that discrimination is being advocated in this state. I mean, no one is going to be directly affected by this marriage law anytime soon, but the repercussions socially are going to be more than anyone is thinking right now. If some Californians get the idea that discrimination is okay, they are going to run with it."


Little did 17-year-old Amber know what would happen in the years that followed. Not only would some states legalize gay marriage, but many more would ban it, most of them in their state's constitutions. And the state she lives in would continue to disappoint her, the only hope coming from the idea that California martyred itself in the arena of gay rights (we'll probably make it to the Supreme Court for Proposition 8, eventually) so that other states could get a leg up and carry the torch. The downside is that California  will likely now be one of the later states to legalize gay marriage (which is ridiculous), but I guess the good news is that we're not Utah, or Mississippi, or Pennsylvania, which are among the far too many states at the bottom of the gay rights chart.

I didn't understand, at 17, just how powerful social conservatism in general would become over the next 13 years. Or maybe it was always like that, and I didn't see it then. Either way, I was young, innocent, thought I knew everything and--ha!--still thought that my vote would make a difference in California.

But in spite of it all, yesterday was an amazing salve to the wound. To see Obama grow a pair of balls for what I consider maybe the second or third time in the last four years, and to put his re-election on the line to come clean about his true beliefs ... it was extremely meaningful. For the first time, I really felt that Obama is my President, the dude I voted for in 2008. You know, this dude: 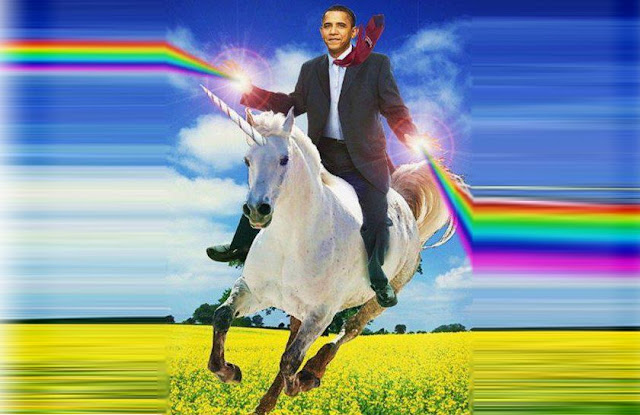 I don't even know where this was going anymore, except that yesterday I cried tears of joy when I read Obama's words. And I know its just one step, and a seemingly small one, but it had never happened before yesterday,  and that--to 17 and to nearly 30-year-old Amber--is an occasion worth celebrating. And shooting rainbows out of your fingertips.
Email Post
Labels: inspiration life the future the gay the past
Location: San Francisco, CA 94107, USA