Here I am! Back at home, living normal life after two days taking photos and absorbing wisdom at the TYPO design/typography conference at YBCA. I am having trouble talking about it because this wasn't just a photography job; as it turns out, this was a life-changing, phenomenally inspiring and motivating event that has shaken me up in the best ways.

I went through graphic design school after college (2007-2008), but what I learned from it (other than design principles and valuable skills) is that even if I try my hardest, I am just not a very conceptual person. And in a city saturated in talented designers, that means I can't really compete for jobs, and I wouldn't want to anyway, because I know almost any other trained designer could do much better. I'm fine with this--at least I was able to try and find out, right? Plus, it helped me know for sure that pursuing photography was the proper path for me, so I have no regrets.

But that doesn't mean I don't love design and typography; I very much do.

So working this conference was doubly great for me, because I knew I'd be interested in the subject matter. I didn't really know how much I'd feel right at home, though. Or how it would make me realize how much I am among peers in a gathering of creatives, even among those who are superstars in their field. Being someone's peer doesn't mean you're on the same level achievement-wise; I think it does mean you're on the same level in terms of sharing a common passion for creative work, and respect for that in others, and I don't encounter often a community of people who comes together & is willing to get along like that.

It happened this time, and for the very first time I felt like I was truly among people who respected me, thought of me as more than just a cute girl with a camera who doesn't know anything about anything. I guess I'm used to hanging out with academics, who will never respect me no matter what I do or who I am, because I am on a different strata of society (in their eyes); most graphic designers/typographers aren't academics, and I am more grateful for that today than I've ever been. I also am used to hanging out with hipsters and other elitists who love to tear each other down & build themselves up. Here's the difference in what I experienced at TYPO: real people. 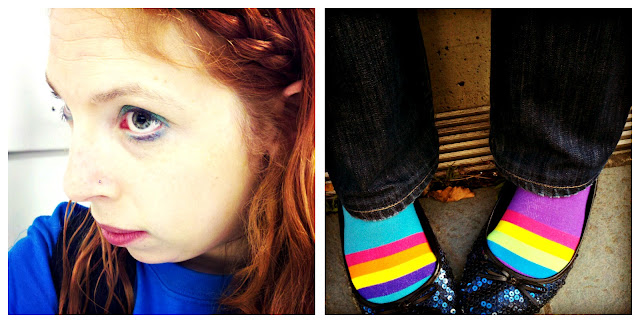 I ended up renting some equipment for the conference, since my camera's screen has been broken for ages (sometimes it goes back & forth if I hit it really hard...for real), and FontShop was paying me too much, and I cared too much, to gamble on what the photos looked like until after a day had gone by. I splurged a bit on this, but it was so totally beyond Thunderdome worth it. After spending a lot of time studying some absolutely gorgeous conference photography on the interwebz & combing through the exif data, I rented a 5d mk2 (I have a 5d mk1) as well as a 24-70mm f/2.8 zoom lens. I ended up using the 24-70mm about 65% of the time, and my 70-200mm f/4 the rest. I rarely use either of these lenses, so it was a treat to be able to (plus, both were L-series glass .... fancy!). Unfortunately, I became very attached to the incredible 5d mk2 I rented. His name is Bertram, and yes I did name him, and yes I realize that was a bad sign ... but anyway. We made magic together. I felt very charmed as a photographer for the entire duration of the conference; I could seemingly do no wrong, always knew how to adjust, swallowed my fears repeatedly, and took some great photos. I am my own worst critic and it's very rare for me to look back at the photos from a shoot and not find serious fault with them, but  I am thrilled with how these photos came out, and very proud of them. I can't wait to finish editing & show them to everyone who attended. I hope they are excited, too.

I had to return Bertram to BorrowLenses today, and I was really sad; we were good buddies! Also, now I have firsthand knowledge that I do need to upgrade my camera. I was hoping that I was just making things up, and that the next generation wasn't actually much better; I was wrong. This upgrade now has even more urgency to it, but I'm still not sure how long it will take me to gather the money. The price of a 5d mk2 only went down $300 when the mk3 came out last month, to $2,200 on Amazon. That's a huge amount of money to me! Yikes. And don't suggest I have a print sale; all efforts to have print sales for similar fundraisers on my part resulted in a big fat zero dollars and zero interest.

I have so many stories to tell, including the part about the conference speakers' dinner at Zynga Thursday night, where I got drunk & stumbled home & tripped over a dangerous sidewalk and scraped the sh*t out of my foot (yep, I'm that awesome!) ... all because I was too engrossed in my smartphone to look up and see where I was going (awesome); but right now it's all a bit overwhelming and I'm still trying to process it emotionally, mentally and even physically (hard work never felt so good). I'm sure that means I'll never talk about it again here, but I hope I prove myself wrong.

I have to confess: I'm totally thrown off my game at this point. For two days I felt like I was away at the best summer camp ever; I became unaware of what day it was, what was going on in the world, or anything outside of the conference. Now that I'm back, I still don't really know what's going on and am a huge space cadet failure type thing. So please forgive me for ending this entry now, and I'll be back to my normal schedule and brain patterns very soon. ☆
Email Post
Labels: design inspiration instagram life photography san francisco snapshots typography
Location: San Francisco, CA 94107, USA