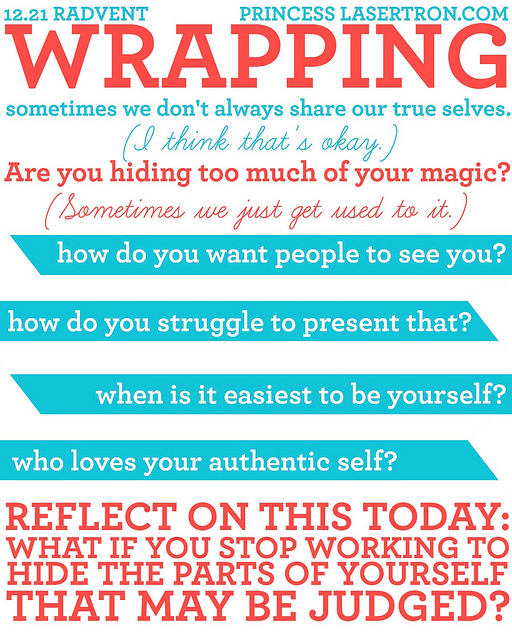 Right before I graduated high school, my school's class council had an awards ceremony where they doled out awards to all of the graduating seniors. There were the more classic ones, as I recall, but when my name was called, I was given the "Amber Parry Award" (Parry was my maiden name). The award was named after me because, they said, I was so unique, and unafraid to be myself in a world that always tried to classify or label me. I was honest to a fault back then, about who I was.

That was more than a decade ago now. I wish that I'd revisited that moment more in the years that came after, but I became lost soon after that moment for several years, and that conviction toward being myself slipped away. Actually, more accurately, I lost sight of who I was for many years, and my entire 20s has been spent trying to get myself back. A task I feel I've succeeded at, by the way.

It's the same me that I was when I was 17, and yet its not; I am much, much more guarded. I have a lot of trouble letting others in, period. Here's the truth: I prefer to skim along the surface of my relationships, because I now hold the perhaps sad & misguided view that however much you let others in, eventually they will turn around & use it to hurt you.

Scott is the major exception to this. Scott knows me more completely than I thought it was ever possible for another human to know me. I am beyond grateful to the universe and to Scott for this. He accepts me for who I am, even the parts that literally no other person in my entire life has known. Literally.

Occasionally I'll find a place where I feel like people are kind of like me; that they understand what my perspective as a perpetual outsider is like. I found that this year at the drag/variety show I've been photographing since February. Walking into the dimly lit bar where the show was held for the first time, I instantly felt at home, a feeling I rarely feel except in, well, my own home. It was fantastic. Over the next 10 months I've been going, I've found that you don't need to prove anything to anyone else about who you are; if they are going to judge you or misinterpret  you, that's their problem, not yours.

I struggle to be authentic sometimes, regardless, because I do fear that people will always have the wrong idea about me. As I get older, and particularly in the last year, though, I've discovered that I have what I'd like to call "a decreasing tolerance for bullshit," which has left me thinking that there's just not time to be anybody other than who you are. Isn't that a lot of effort for something disingenuous?

Ultimately, what I need to be able to do is not fear interpersonal intimacy. I have a feeling that my friendships might be healthier and more rewarding if I actually were able to do this. And as for being myself? I don't think I have a huge problem with that. If anything, I get told to tone myself down, like at job interviews, or funerals (!) or other professional/subdued/classy type gatherings. Oops?