We're halfway through Radvent as of today (halfway through the month)! I feel like somehow Megan (aka Princess Lasertron) had these particular words picked out for Radvent this year because they somehow all apply to the challenges I've faced this year. I know that's a fallacy, and that it merely means that Megan has chosen effective topics, but it still feels good to call myself out in the shivery public domain of the internet every day, to challenge myself to lay it all out there on the great table of the internet. 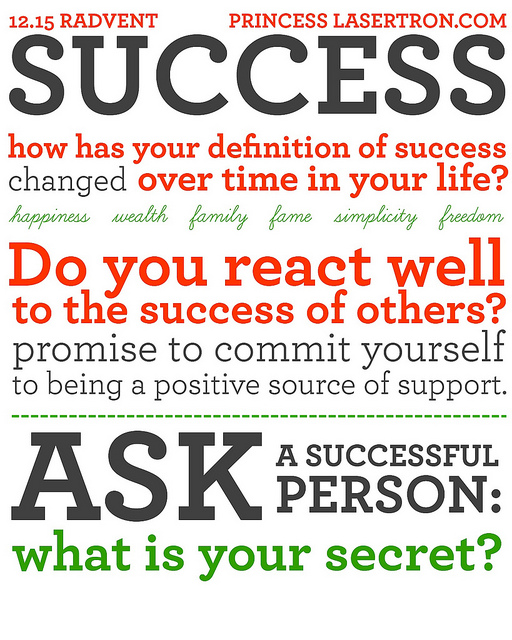 Success. Only the major (hor)crux of all my issues this year, my 29th year.

When I was a kid, I felt unequivocably that if I wasn't the best (#1, straight As, best grades in the class, even a child prodigy), then my life was already a complete failure & a waste. My parents never pressured me, but they did always tell me that I was "the best," something that may have added to my cognitive dissonance when I didn't end up being the best ... which, quite honestly, was always. I am the queen of coming in 2nd. Jack of all trades, master of none. Most people, I think, would be happier with that than I am.

I am an extremely driven person, but I shy away from overt competition. I wither. It's kind of a stupid combination of traits to have, when you think about it. They don't go together at all. I put a lot of pressure on myself to break the "glass ceiling" that has prevented me from being the best or coming in 1st in pretty much every single thing in my life; but as I'm sure you're about to tell me, the glass ceiling is probably myself. I am aware of that, and I've also come to realize in the last five years or so that being perfect is impossible, and that "doing it all" is a great facade, but is also impossible.

My definition of success is currently evolving, from a less mature to a more mature perspective. I am not through it yet, though, which means that semi-regular freakouts have been the order of the day for the last year. Getting older means adjusting your dreams a bit. I'm not saying that I've given up on fulfilling my dreams, but I feel like I've gotten a little more realistic. I am far more aware of my limitations. Yes, I want to quit my job and be a photographer full time. But unicorns aren't going to rain out of the sky when that happens; I have major issues dealing with the business & marketing side of my business and that's a hurdle that I simply must overcome within myself before I can justify making such a career leap. In the meantime, I'm trying not to beat myself up for not being there yet. I can't force it. I can only live my life the best I can.

Here is where shit gets real, though: much of the time these days (unlike 10 years ago), I find that another's success does not automatically mean my failure. But I must confess something I've kept to myself:  I have been seriously tested in this regard in 2011, and I've not been strong or confident enough to overcome it.

I usually have no problem getting along with other photographers, as long as I perceive that we are on an equal playing field, colleagues, compatriots. It's when I feel the playing field isn't level that things unravel, or like someone is playing favorites and leaving me out in the cold/disrespecting me. I've felt so stupidly bitter, resentful, and slighted this year, more than any person should feel any of those things, and I feel terribly about it--both because I believe it's terrible to feel those things toward people you consider friends, and also because I know it's all in my head. It's had real impacts on my friendships this year, and that ... well, that just sucks, any way you slice it. The landscape of my life and my friendships has changed substantially since December 2010, and though it makes me really sad, I have to believe that I'm going through all of this so that eventually I can transform into a better version of myself.

I know that what these negative feelings are based on; it's the same old fear that in spite of throwing my entire soul into photography for the last decade, and leaving my blood/sweat/tears on the floor on my way to getting where I am, I am still somehow coming in second. First loser. At least, in some people's eyes. And as I know all too well, "fear is the mind-killer," and I can't get caught up in it anymore. I just can't.

I also spent the first half of this year having a major crisis of confidence about my photography career direction. What was working for me last year, art-wise and inspiration-wise, wasn't working anymore for me this year, and I was terrified. I had to work through a lot of dark, depressed nights of total confusion and uncertainty before I decided to just start feeling better, and not worry as much, and be gentler to myself about the timeline of my creative process. The good news is that when I look back on the year now? I don't think of the darkness of those 6 months at all. I define that as a success.


I've asked successful people what their secret is: the answer is almost universally one word: confidence.


It goes hand in hand with not giving a shit about what others are doing, another lesson I've been trying so hard to learn over the course of the last few years. I am closer than I've ever been, which is awesome, but I still have far to go. And since life is about "the journey" then that's a good thing, isn't it. ☆